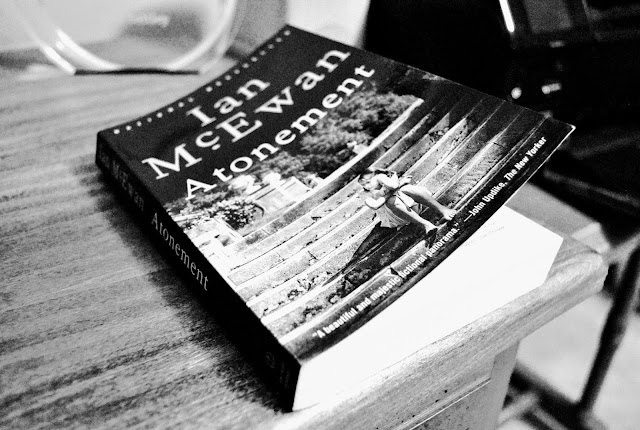 If you ever discover that what you're seeing is a play within a play, just slow down, take a deep breath, and hold on for the ride of your life.


You are currently reading a blog post about reading books, and the particular book being discussed today is a fiction book about itself. This post is about Atonement by Ian McEwan.

As someone who is a fiction novice, this one was almost too complicated for me. I read a brief synopsis online before diving in, and it was described as metafiction, which means that the book occasionally gives references to itself. I was more than half way through before I remembered this description and had to think about what that meant for this book.

The first 75% or so of the book is in third person and there is no distinct narrator. It is not discernible right away as one of the main characters because this person seems to be able to give equal perspective to everyone else. Only when manuscripts were discussed regarding the characters did I realize that the book I am reading is actually purported to have been written by one of the characters, which was fully realized at the end. This may seem patently obvious to experienced readers of fiction, but to me this was an entirely new phenomenon.

The book is supposed to be about the concept of atonement (hence the title), but I am not sure that the fictional author pulled it off. For one thing, we are left not really certain if the contents of the book describe the reality of the story or the atoned reality put forth by the fictional author. For another thing, writing a fictional narrative about atonement is not the same thing as making amends (making up a fake story to atone for real lie doesn't seem quite equal). It seems to me like everyone suffered a worse fate than the narrator, and her life in her own head (and the fictional narrative alternate ending) was sufficient atonement for her as far as she is concerned. Unfortunately, that is not the way reality works. Of course, nothing about this book was very close to reality. I am currently evaluating writing done by a fictional author rather than what was done by Mr. McEwan as the actual author of this book.

This book was met with critical acclaim, and I can only assume that I am missing something or else the style was surprising enough to be new and exciting to the readers.


In case anyone is keeping track:
-I picked up this book from my personal shelves and have no idea where I got it originally.

Over the course of time, I have had quite a few different blogs with different themes and styles. My domain (www.uberfrau.net) is up for ren...